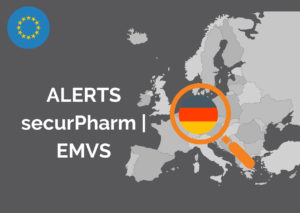 Alerts in securPharm and EMVS

Approximately two years after the EU-wide Falsified Medicines Directive (FMD) came into force, many false-positive alerts make it difficult to find actual falsifications. Both, the national systems (NMVS) and the EMVS are working on reducing these alerts.

Although the number of false alerts in the European anti-counterfeiting systems has decreased significantly since 2019, the absolute number is still too high to be fully processed by the authorities. Therefore, national systems are increasingly working to reduce false alert rates. In 2020the false-positive alerts could be reduced from 0.76% to 0.42% of the total booked-out serial numbers in Europe. In the securPharm system (NMVS Germany), a decrease in false alerts from 0.42% to 0.17% was achieved along with growing usage intensity. The alert rate appears to be low, but the amount of false-positive alerts per day is still so high that not all can be checked and processed by the authorities.

securPharm has analyzed the causes of the alerts for 2020. The main causes are

– Misconfigurations in the systems involved

Thus, the main causes of false-positive alerts in the securPharm system for the entire year 2020 are similar to the causes that were also evaluated at the beginning of the year when there were significantly more false alerts overall.

“The main focus of securPharm has been and continues to be on the number of alerts, which has decreased in relative terms but is still too high in absolute terms. securPharm and its members have therefore intensified their communication on causes and ways to avoid errors, as well as providing technical support to users” Conclusion, securPharm Status Report 2021

If an error message occurs in the pharmacy system before dispensing the medicine, an alert is generated. At the same time, a unique alert ID is assigned, and the product is removed from distribution. This is followed by a search for the root cause. For this purpose, the alert ID will be forwarded by securPharm to the EU Hub. From there, the suspected counterfeit is passed on to the corresponding onboarding partner to whom the product is assigned. From this point, there are two possible scenarios:

a.) If the national ACS Alert Management Tool (Germany) is used by the pharmaceutical company/responsible party, the error cause must be determined and reported back within seven days. If it turns out to be a false-positive alert, e.g. due to incorrect data entry by the responsible person, it is classified as a false alarm with no obligation to report. If no false alarm is detected, the incident becomes reportable.

b.)          The 7-day period does not apply if the responsible company (MAH/CMO) does not use the AMS Alert Management Tool. The suspected falsification becomes directly reportable.

– The obligation to report a potential suspicion of counterfeiting exists, both, for the pharmacies where the alert occurred and for the manufacturers themselves.

– Through the Europe-wide unique alert ID, the reports can be assigned accordingly by the supervisory authority.

– Since December 2020, a new function in the securPharm user interface has also enabled communication between pharmacies and manufacturers about the status of the error message. The pharmacy remains anonymous in this process.

In addition to the NMVS, the EMVS is also working on reducing false-positive alerts. Among other things, the project “Stabilise EMVS Alerts (SEA)” has been set up for this purpose. In addition to reducing false-positive alerts, the project also serves to further harmonize the national systems and to develop the provision of additional information for the analysis of the alerts. The EMVO reports that through this project the number of alerts with the cause “A2 Batch not found” has reduced by 72% within three months.

In March 2019, shortly after go-live, the alert rate in the EMVS was still merely under 7%. In February 2021, however, the EMVS recorded only 0.32% alerts. Various initiatives are intended to further reduce the number of alerts to better ensure patient safety. The focus is primarily on alerts with avoidable causes, e.g. incorrect scanner configurations in pharmacies or other handling errors.

It is not only the authorities and national systems that are troubled by the number of false-positive alerts. Pharmaceutical companies themselves often have to deal with several hundred alerts every day. However, as our work with our customers proofs, as few as 60 alerts per week are enough to disrupt the daily operations. Because SMEs in particular, often do not have the personnel capacities to analyze the cause of the various alerts in addition to their actual work. That is why we have developed an alert management service that relieves our customers of analyzing the causes of FMD alerts.

You can find more information on our product page about our Alert Management Service mytracekey ALERTS or contact us directly.