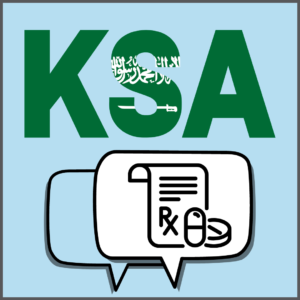 In Saudi Arabia, work has been underway since 2015 to make medicines safer and prevent counterfeiting through serialization. Unlike in Europe (end-to-end), a complete track-and-trace system will be introduced.

Products: All medicines for humans and animals

Aggregation: Yes, according to GS1 standards

Introducing a track-and-trace system in Saudi Arabia is part of the Saudi government’s Vision 2030 program. By 2030, Saudi Arabia wants to track all medicines and healthcare products registered for human use, domestically and internationally.

SFDA allows different variants of printed information. In most variants, the expiration date must also be on the outer packaging in human-readable form.

For pharmaceutical serialization, Saudi Arabia relies on a track-and-trace system that starts with the production or import of the drug and finds its endpoint with the consumer. Each stakeholder, i.e., manufacturer or importer, must register with the SFDA. The entire supply chain will be monitored this way to ensure that counterfeit drugs in the supply chain are quickly identified and removed. Also, the data collected from tracking the entire supply chain will provide a basis for further action. In addition to making medicines safer for consumers, availability will also improve. Other measures include, for example, a real-time stop on recalls, verification of medications by consumers themselves, and simplified reporting of adverse reactions.

Since October 2019, aggregation of individual packages has been mandatory in Saudi Arabia. From now on, an 18-digit Serial Shipping Container Code (SSCC) is obligatory at the carton and pallet level. Each whereabouts of an aggregated drug unit will be marked via the GLN.

Initially, only human medicines will be tracked throughout the supply chain. In the future, the measures will be expanded to include herbal and other healthcare products and medicines for animals. Some products are exempt from the track-and-trace process in Saudi Arabia. These include, for example, unsellable samples, medicines for personal use, or those approved for repacking.

Also, similar measures and regulations are planned for the food and medical technology sectors.