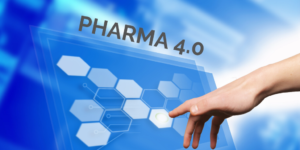 Analyzing, automating, data integrity, patient centricity, data mining, process optimization – Pharma 4.0 is versatile. But what is meant by this and why does digitalization still have room for improvement in the pharmaceutical industry?

Pharma 4.0 is part of the Internet of Things (IoT). The term describes the part of the IoT that affects the pharmaceutical industry. Whereas Industry 4.0 focuses on the manufacturing industry in general, i.e. describes possibilities and ways in which products can be produced more easily and quickly using the latest technologies, Pharma 4.0 covers exactly those technologies, networks and process changes that are in the area of the pharma.

As in other industries, the IoT in the pharmaceutical industry changes how processes work, how the individual players communicate with each other and how supply chains can be monitored. Along the digital drug lifecycle, there are various possibilities for digitalization. These include smart production lines and processes, Track&Trace or temperature monitoring throughout the entire supply chain using sensors.

Pharma 4.0: The product cycle at a glance

The digital image of a supply chain makes the identification and information of the individual players much easier and more time-efficient. It makes it possible to track the entire product cycle. The Digital Twin of the supply chain offers various advantages, for example, counterfeits can only be introduced into the supply chain with difficulty.

For parts of the life science industry, but also, for example, in the food sector, it is currently true that information and alarm chains are often cumbersome. In the event of an incident, e.g. that a product has to be recalled, it often takes a long time for the incident to be rectified and later analyzed and the resulting process changes made. A digital supply chain can make recalls much more efficient and cost-effective. If defects only relate to individual products or batches and their whereabouts can be precisely determined.

The pharmaceutical industry is a role model for other industries

The European pharmaceutical industry took its first major step towards digitalization at the beginning of 2019. The Falsified Medicines Directive (FMD) has forced the pharmaceutical industry to digitalize in recent years. Now the production lines are communicating with cloud systems to retrieve the corresponding serial numbers. Instead of a punched card system, which was still in use in some pharmacies, modern scanners and software are now available in the pharmacies. All areas are affected, from contract manufacturers to logistics to hospitals.

Nevertheless, or precisely because it has already taken many important steps in digitalization, there is still potential in the pharmaceutical industry. Areas such as patient centricity or the individualization of medicines are particularly worth mentioning here.