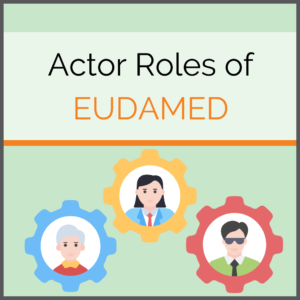 The EUDAMED Actor Roles are part of the Actor Registration Module. It is the first of the six modules to be made available to the public. Each person or actor must register here before using EUDAMED. The European Union defines an actor as: A natural or legal person (organization) with a specific role that must be registered in EUDAMED. There are seven roles with different obligations and tasks. These include: European Commission, competent and designated authorities, notified bodies, manufacturers, authorized representatives, system and procedure pack producers, and importers.

As the names already indicate, there are prominent differences between the respective EUDAMED Actor Roles distinguishable into two different groups. In this process, the supervising actors are the European Commission, competent and designated authorities, and notified bodies. The economic actors consist of manufacturers, authorized representatives, system and procedure pack producers, and importers. Thereby, the economic operators receive a Single Registration Number (SRN). This is a unique form of identification for EUDAMED and is assigned once the competent authority has validated an actor’s request. But what makes up each role?

The EUDAMED was developed as part of the MDR and IVDR by the European Commission to create more transparency for patients. Within the database, it acts as a supervising actor. The actual tasks it has are not described further in the regulations. However, it can be assumed that it acts as a kind of administrator and, for example, grants the other supervising actors their rights within the database to ensure a smooth process.

Competent authorities are responsible for evaluating and approving economic operators in EUDAMED and grant SRNs after a successful registration process. Recognizing Authorities, on the other hand, grant their approval to Notified Bodies, act as a supervising entity for them, and communicate possible inconsistencies with them. Their EUDAMED Actor Role is to store the obtained information about the notified bodies in the database.

Notified bodies are usually commercial enterprises responsible for the approval of new medical devices and subsequently for their post-market surveillance. Therefore, if manufacturers wish to place a new product on the market, it must first be tested by a notified body. In EUDAMED, they then document the result of the test and whether the product was approved, rejected, or the application for testing, was withdrawn. NANDO (New Approach Notified and Designated Organisations) serves as the database for the various Notified Bodies.

To be validated, economic operators submit a registration application in EUDAMED. This includes providing the name, address, and contact information. If manufacturers without headquarters in the EU wish to register, this can be done for them by authorized representatives. After registration has been successful and approved, the national competent authority assigns the actors their SRN. This is confirmed by EUDAMED via e-mail. In this process, the further obligations of the economic operators are, for the most part, very similar. Ultimately, manufacturers and system and treatment unit producers must have a Basic UDI-DI assigned to their products and add this and all other necessary information to EUDAMED.

Further obligations for all EUDAMED Actor Roles are the post-market surveillance, the registration of clinical studies, the upload of accident reports and safety notices, as well as the update of the registered data of a product.