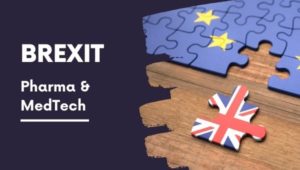 It has taken four years for the British to finally leave after their referendum against remaining in the European Union. Despite the last-minute trade deal, the impact of the Brexit on the Pharma and Medtech industries is huge, and they are left with only a little concrete information.

In 2016, just over half of the Britons voted for the UK to leave the EU. The pharma and MedTech industries have faced a big question mark ever since. It was not clear for a long time whether there would be an agreement and how this would affect the highly regulated industries. After countless debates and postponements in the past years, the EU and the UK agreed on a trade agreement of around 1400 pages before the turn of the year, on Christmas Eve. The transition period finally ended on 31.12.2020.

As for all other goods, the open border with Northern Ireland does not make the discussions easier. The following guidelines apply to England, Scotland, Wales, Isle of Man, and the Channel Islands:

What will fall apart

Exporting to the UK

In principle, there are no explicit provisions in the trade agreement for topics such as pharma serialization and the corresponding regulatory requirements. Therefore, EMVO has compiled some concrete instructions for action in this regard. Nevertheless, there will be more detailed agreements and regulations coming in the future. Besides, Great Britain has announced that it is striving for its regulations concerning pharmaceutical serialization and protection against counterfeit medicines. However, it is not yet clear when and to what extent this will happen.

For the medical technology industry and the implementation of the MDR, Brexit means a step backward. The Notified Bodies certified in the UK will lose their competence and thus also their certification. Therefore, they will no longer be available to European medical technology manufacturers for the far-reaching recertification for the MDR.

Medical devices are not included in the agreement between the EU and the UK. They are part of the general regulations that affect all CE marked products. For CE products from the EU, this means that they will continue to be accepted in the UK (until 30 June 2023). From 01.01.2021, CE marking in GB will be replaced by the UKCA system. For two years, both systems will run in parallel. Both standards must be met for imports from the UK into the EU as only CE-marked products will be recognized in the EU.

To continue selling medical devices from the EU on the UK market, they need an RP. In this case, the same rules apply to pharmaceutical manufacturers. Conversely, manufacturers from the UK must appoint an EU Authorised Representative.

The trade agreement between the EU and the UK leaves many questions unanswered. It remains to be seen what new regulations the UK will draft for topics, such as serialization or patient safety for medical devices, and whether and how much additional effort this will cause for manufacturers.