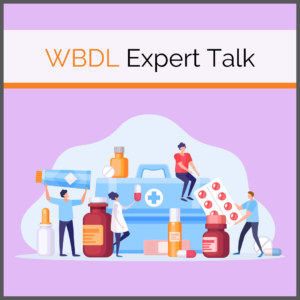 Every day hospital pharmacies receive large quantities of pharmaceuticals. These large quantities must also be scanned via securPharm. A more user-friendly solution for this is Delivering Consolidated Shipment Data (German: WBDL). Users of our system for hospital pharmacies have often told us how much the accompanying digital material simplifies the inspection of incoming goods. At the same time, however, it is noticeable that only a few manufacturers send their products in this way.

To gain more practical insights, we spoke with a pharmaceutical technical assistant (PTA) of a southern German hospital. He approached him, because he regularly works with mytracekey HospitalDirect and knows the facets of WBDL. On the one hand, we wanted to find out which advantages exactly its use offers to hospital pharmacies. On the other hand, we were concerned with the lack of legal requirements for WBDL and the resulting inconsistency in data delivery.

The biggest advantage of Delivering Consolidated Shipment Data is the time saved. This is how our interview partner confirmed it to us. To find out exactly how much time is saved, he started to collect the figures of 2022 in June until Dezember and evaluated them. The result showed that out of 1031 items requiring securPharm, only 113 were delivered with WBDL. During the scanning process at the receiving point, this small proportion of products with a digital delivery bill, the so-called digital twin, resulted in a time saving of almost 32 hours from June up to Dezember. This amounts to 21% of the total workload for processing the goods receipt that was saved. Considering the percentage of items, it is obvious that much more time could be saved if more or even all pharmaceuticals were delivered with WBDL.

In addition to time savings due to WBDL, the reduced occurrence of errors is another positive side effect. The fewer individual packages that need to be scanned, the fewer potential errors can occur. According to the PTA, the biggest sources of error are people and technology. Typical errors with people are, usually, scanning packages twice or not at all. But technology can also fail. For example, it is possible that an entire shipment has to be processed again if the system stops working during the scanning process. Be it the internet connection, the data transmission on the part of securPharm or the system on the part of the provider or hospital. All these problems could be prevented or at least significantly shortened by WBDL.

A major hurdle in Delivering Consolidated Shipment Data is the lack of uniformity in the systems offered. Since the design of the accompanying data delivery is not specified by law there are also no precise regulations regarding the format in which it must take place. In some cases, the data arrive at the hospital pharmacy in encrypted form, in others not. Our conversational partner told us, in the latter case, data must be subsequently encrypted, which also takes time. This inconsistency can lead to difficulties and confusion due to a lack of routine in receiving goods.

Our WBDL expert regrets that, due to data protection, he is not allowed to find out which manufacturers or suppliers make already use of this system. Although data privacy is important, he could use this information to directly approach manufacturers. Otherwise he could try to convince them to use WBDL for the benefit of hospitals. Voluntary self-disclosure by manufacturers could perhaps help here. Due to the current political situation, the important issue of WBDL in hospitals has unfortunately been pushed into the background. That’s why, clear legislation with regard to the delivery of accompanying data would be of great help.