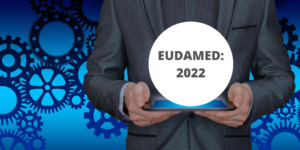 An important component of Medical Device Regulation (MDR), the launch of EUDAMED, has been postponed by two years to May 2022. However, May 2020 remains the date for the other elements of the MDR.

On the one hand, the EUDAMED serves to create more transparency for the public and medical professionals, on the other hand, the central system should improve the coordination of the individual EU member states. The goal is to make the EUDAMED database the central information system for medical devices and their entire life cycle.

Reasons for the delay

What does this mean for businesses?

The postponement of the EUDAMED deadline effectively means that companies will have until 2022 to organize the upload of data into the database.

It was planned that all new and changed data would be stored in EUDAMED by May 2020 and that the remaining data would have to be added within 18 months. Whether this transitional period can now also be applied to the new deadline is unclear.

Why you should stick to it anyway

MDR involves much more than just reporting the unique device identifiers and documentation to a database. By postponing the deadline for EUDAMED, medical device companies now have a little more room to take care of the other components of MDR. Nevertheless, this point should not remain until the end of 2021. If the companies plan in more time, the implementation of a new system will be much less stressful and there will also be room for intensive cooperation with a service provider so that optimally adapted solutions can be created.

The EUDAMED database is not fully functional as of March 2021. So far, one module is active: the EUDAMED module for the registration of economic operators has been available since December 2020. Two more modules are expected to be operational from September 2021 onwards:

The lack of functionality of EUDAMED is one of the issues of concern to stakeholders – in addition to too only a few Notified Bodies and a resulting certification backlog, and ambiguities regarding the interpretation of regulations. The issue was recently brought to the attention of the EU Commission and the German government by the Baden-Württemberg state government (among others). They called for further steps to be taken to make the implementation of the MDR easier and more sustainable for companies.

Until all EUDAMED modules are available, the Medical Device Coordination Group (MDCG) says the relevant directives should continue to apply (90/385/EEC and 93/42/EEC) to meet the information exchange provisions set out in Article 123(3)(d) (MDR). Companies have until six months after notification that all modules are fully functional to implement the EUDAMED requirements.

MDCG guidance with alternative technical solutions until EUDAMED is fully available can be found here.