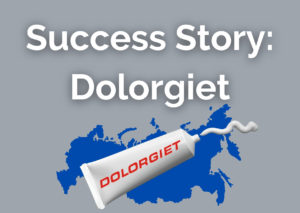 Russia has become an important export country for Dr. Theiss Naturwaren GmbH in recent years. The company Dolorgiet, which is part of the Dr. Theiss Group since 2016, has been selling its product range not only in Germany but also in Russia since 2008. As, unlike in Europe, here not only Rx drugs have to be serialized, but also Over-the-Counter drugs (OTC), Dolorgiet had to find a suitable serialization partner for Russia in 2019.

High requirements from the Russian side

The Russian serialization requirements for the pharmaceutical industry are significantly more complex than those of the European Falsified Medicines Directive (FMD). Not only the length of the codes but also the new processes, in particular, are some of the major obstacles, as these imply a lot of interaction with the Russian authorities.

To overcome these obstacles, one major advantage for Dolorgiet has been its affiliate company in Russia as it has simplified the import scenarios. In Russia, especially for the import of goods without a locally based company or cooperation partner, particularly strict rules have been applied since July 2020. Thanks to Dr. Theiss Naturwaren Russia, it was not necessary to establish a direct connection between the mytracekey PHARMA software and the Russian authorities. Therefore, the focus was on establishing the new data formats and reporting standards. For this purpose, a service provider on the Russian side was brought on board. This collaboration proved to be so fruitful, that this cooperation has been adopted for other tracekey customers as well.

“Obtaining detailed information on the Russian requirements was certainly one of the biggest challenges we had to overcome together with tracekey. Besides, we had to implement the requirements, which were not exactly defined then. Additionally, this is a very complex software topic that is not always easy to understand in detail. As the communication with SUZ and MDLP exclusively runs through our Russian colleagues, we are working very closely with them. Building a stable process involving Dolorgiet, Dr. Theiss Naturwaren Germany, and Dr. Theiss Naturwaren Russia was also challenging.”

— Svenja Lambert, Head of Manufacturing at Dr. Theiss Naturwaren GmbH and responsible for the serialization project

Until September 2019, all parties involved assumed that the crypto codes could be requested in stock and would remain valid for six months. But then, a new decision was made by the Russian authority: Feedback to the authority of actually used crypto codes is possible only within three months of their receipt. Therefore, Dolorgiet always requests the needed codes from the Russian authorities shortly before starting a new production.

„At tracekey, you always have a competent contact person who addresses the problems in a solution-oriented manner. Besides, tracekey responded quickly and flexibly to the requirements of the Russian government, especially in the development process.“

In October 2019, the time had come: the implementation of the Russian serialization requirements in the mytracekey PHARMA software had progressed to such an extent that Dolorgiet, in cooperation with Dr. Theiss Naturwaren Russia, was able to carry out the first tests on the mytracekey test system. To be able to already produce in December and thus to meet the tight deadline, the first production was still carried out on the test system and the switching to the productive system took place later.

At the end of October, another major change has been discussed by the Russians: The possibility of postponing the deadline by half a year, from January to July 2020, has been negotiated. However, there was no certainty that this would be implemented. Dolorgiet was faced with the difficult decision of either not being able to produce according to the Russian specifications or to work at full speed together with tracekey in the last weeks before the original deadline. In the end, Dolorgiet decided in favour of the postponement, accepting the risk of unnecessary stress.

“After some deliberation, we then decided to stick to the original deadline so that we could use the first six months as an internal test phase in the event of a postponement,” explains Lambert.

In preparation for the new requirements in Russia Dolorgiet had already preproduced some batches for the Russian market. Thus, that there wouldn’t be any unnecessary time pressure delaying the project scope. “Nevertheless, there was a point in time when there had to be a new delivery to Russia, which has been an additional aspect in sticking to the original schedule,” Lambert explains the decision to meet the original deadline.

In December 2019, the final tests took place to verify the communication between the new production lines and mytracekey PHARMA. At this time, the Customer Success Team and Dolorgiet were in constant exchange. Until shortly before the start of production, it was not clear whether everything would work flawlessly. Besides, the Christmas vacations were approaching, and production had to take place beforehand in any case. Thanks to the great commitment of everyone involved, it turned out to be a precision landing. As planned, Dolorgiet completed its production of the first serialized batches for Russia before Christmas. The first trucks were able to set off for Russia as early as February after quality inspection.

„As we had already gained experience with the serialization of pharmaceuticals for the EU markets, we knew how much time such a project can take. The biggest difficulty was to react flexibly to the changes in requirements in a short time.“

Despite some hurdles, that tracekey had to overcome together with Dolorgiet and Dr. Theiss Naturwaren during the project, it was realized within the planned timeframe. Thanks to the successful cooperation of all the people involved, Dolorgiet was also able to meet the originally set deadline for serialization in Russia and accordingly deliver the first serialized batches to Russia early.