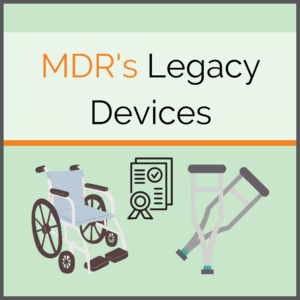 Legacy devices are not directly mentioned in the MDR but are defined in the Medical Device Coordination Group document MDCG 2021-25. Accordingly, these are medical devices that were placed on the market after the application date of the MDR in 2021 until May 26, 2024, if certain conditions are met. Thus, circa 80% of the medical devices registered in EUDAMED are legacy devices.

It refers to Class I devices issued with a declaration of conformity before May 26, 2021, and for which the conformity assessment procedure under the MDR requires the involvement of a notified body. Or devices issued with a valid CE certificate according to AIMDD or MDD before May 26, 2021. These medical devices were compliant under the old regulations but may no longer be compliant under the MDR.

Legacy devices in the MDR have several advantages over “normal” medical devices. For example, it is not necessary for them to show proof of compliance until after the transition periods have expired until May 2024. In addition, UDI assignment by EUDAMED is not mandatory, but can be done voluntarily. However, regarding post-market surveillance (PMS) and vigilance, legacy devices and normal medical devices are alike. Both require post-market surveillance and the annual Product Safety Update Report (PSUR). They thus prove the conformity of their devices. The corresponding data is not required for new products until the PMS.

How do I add a legacy device to EUDAMED?

The registration of legacy devices is also different from “normal ones”. They are registered without a Basic UDI-DI and UDI-DI, but receive an EUDAMED DI as well as an EUDAMED ID. The deadline for their registration is 18 months after the date of application for the MDR, if the EUDAMED is fully functional by then. However, if a critical incident or field safety corrective action is reported during these 18 months by a product not registered in EUDAMED, registration must be immediate. The same also applies to legacy devices that were already on the market prior to the date of application but are no longer being sold.

Just as with new medical devices, tracekey helps manufacturers register their legacy devices as MDR compliant in EUDAMED. Our M2M connection can simplify the maintenance of product data considerably. A simple Excel import into the tracekey system highlight which information is missing for the products so that it can be added there. Afterward, the data is automatically checked, and once entered correctly, it is uploaded directly to EUDAMED via our interface. Thus, errors that creep in can be avoided. Also, the data exchange is direct and automated. Another key advantage is the complete documentation, including correct versioning and an audit trail. Thereby it ensures flawless MDR compliance.