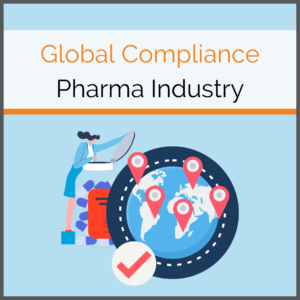 Counterfeit medicines have long been a topic with global implications, which countries are countering with legal regulations, among other things. Raw materials come from China or India, the subsidiaries are in Europe and the USA, and the drugs are distributed worldwide. Due to the global networking of the pharmaceutical industry, internationally active companies must comply with very different laws to achieve global compliance.

Worldwide, the pharmaceutical industry is one of the most heavily regulated industries. The companies’ international trade connections also give rise to global responsibility, demanded by the countries’ legislation. One aspect is the safety of medicines. Groups of states, such as Europe, or individual countries, like the USA or Russia, are actively fighting against counterfeit drugs. More and more countries are now working on making their medicines more transparent and thus safer supply chains through track-and-trace and similar measures. Since 2019, Eurpoean pharmaceutical companies are only allowed to put serialized Rx drugs into circulation (legislation: EU-FMD).

Growing and specific regulations do not make it easy for pharmaceutical companies. Specifically, large and small companies must meet identical requirements. It becomes increasingly complex to meet the regulations, depending on how many and which regions of the world a company is active in. Around 80% of the world’s governments are working on implementing pharmaceutical serialization to combat counterfeit drugs and fraud. Currently, the EU, Russia, USA, China, South Korea, and others have specific serialization requirements for the pharmaceutical industry that pharmaceutical companies must comply with when selling their drugs in these regions. Soon, other countries will follow and introduce their guidelines. These include Saudi Arabia, Abu Dhabi, and Brazil.

The English word ‘compliance’ is also used in German in connection with global supply chains and trade regulations. It describes the conformity of a company with legal requirements in specific geographical or political regions.